Love is a Dance.

Sometimes we’re in a flow, other times we step on each other’s feet.

Sometimes our partner seems to hear a different tune than we do.

Sometimes we can’t decide on who is going to take the lead.

Sometimes we’d like to try out different styles until we find the one that suits us both.

Sometimes we have different dynamics.

And sometimes our hearts are beating at the exact same pace.

We are in the same orbit and our feet create a rhythm while swinging around.

Together we create harmonies that by chance will lead us to a symphony on which we will soar forever. 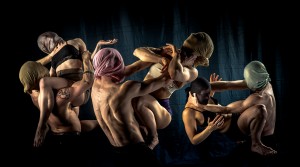 Dancing couples with their arms around each other. Each of them turning at their own pace and with the intensity their bodies are creating with their physicality and intention. Soon couples are starting to turn faster, some are turning slowly and steady, and some are turning so fast that they aren’t able to stay in their orbit and have to let go of each other.

This scene from the new dance piece ‘Speak low, if you speak love’ by Wim Vandekeybus left the biggest impression on me, because it was clearly visible that that’s the way love actually goes. Surprisingly it was one of the quieter moments in the piece, which for the rest was filled with lots of physicality, energy and an almost brutal approach to connect with one and other. Their heads were covered with cloth in pastel pink colours as well as with black and beige ones. Almost as if it’s possible to choose through which kind of colours you’d like to look at the world; to look at each other.

The danced duets were created with different dynamics of a relationship. They varied from being vulnerable, to romantic, to desperate, to abusive; all with the intention to connect despite the clearly experienced rejection and physical and emotional pain.

If we experience rejection and pain caused by our loved ones, we try everything to make the other one understand our point of view. If we feel misunderstood we try desperately to explain ourselves as clear as possible, which might even leads to raising our voice. We talk louder, we might even scream and yell in the attempt to try to cross that bridge that clearly distances our hearts in that moment. The partly brutal and radical attempt of the dancers to connect with one another showed a contrast to how vulnerable and transient love actually is. Trying to dance their way into each other’s hearts the performers were accompanied by the South African jazz singer Tutu Puoane, who performed songs written by Mauro Pawlowski and whose melodies were almost like hearing hope. Hope to speak softer to one another, to speak low, if you speak love. In the moment when loved ones experience the magic of being able to whisper to one another and still understand each other perfectly, there is no distance between their hearts. Sometimes you just need to look at each other and no words are needed. Some people don’t need to talk about love. They are satisfied with the fact that the feeling is just present.

Talking from our heart out of love also gets us shy from time to time. We fear rejection or embarrassment.

Right before the performance of Ultima Vez started, I heard someone talking in Russian, whilst they were looking for their seats. As I looked up, I couldn’t believe who sat down right in front of me, ballet world stars Natalia Osipova and Sergei Polunin, the tattooed ballet bad boy who starred in Hozier’s ‘Take Me to Church’ video. I recognized them immediately and looked around trying to connect to someone who recognized them as well. I was shocked, as I am a big fan and never would have thought to meet them in the audience of a matinee dance performance. The longer I looked around and couldn’t find anybody who shared my astonishment, the stronger my body reacted; my hands got sweaty, my heart started beating, I got goose bumps all over my body and I couldn’t stop smiling. It felt as if I would meet my long-term crush. I was in that moment a shy 12-year-old girl, being to shy to say or do anything about it. This state lasted throughout the one hour and 45 minutes performance. In my head I thought about ways how I could approach them after the show just to share my appreciation for their art. Being Russian my first language, didn’t make it easier on me surprisingly, because I still felt like I was in another parallel universe. After the show on my way out, I bumped into them at least four times until I had enough courage to walk towards and tell them how big of a fan I am, hoping they would not feel bothered in their private ‘off-stage’ time. Luckily they were touched by my words and I even got to chitchat a little, yet I don’t really recall the conversation since I’ve been high on love at that moment. I was brave enough to ask for a signature but not brave enough to ask for a photograph. Still, I found this to be a victorious moment since I never had the courage to do the same thing when I was twelve years old.

The rest of the evening I was floating on pure joy and happiness, I didn’t need to eat, I couldn’t sleep, I was truly high on love. So I guess William Shakespeare was right when he said to speak low if you speak love, but that feeling inside lets your heart pound so loudly; just as loud as the hearts of the dancers after they finished their exhausting physical performance and bathed in the applause. You want to scream out and let the whole world be a part of it.

about the author: Regina Janzen

Regina Janzen (1990) was born in the former Soviet Union, Kazakhstan, to a Ukrainian mother and a Russian/German father. Growing up in Germany and being in contact with different cultures and countries made her a true Cosmopolite. In summer 2015 she graduated as a professional dancer and performer from the modern/dance theatre department at the Fontys Dance Academy in Tilburg, the Netherlands. During her study she discovered her ability to use choreography and creative writing as a means of expression. Being a lover of all art forms, she prefers to work interdisciplinary, which she continued to develop in the part-time education Scenography at the Royal Academy of Arts in Antwerp, Belgium.