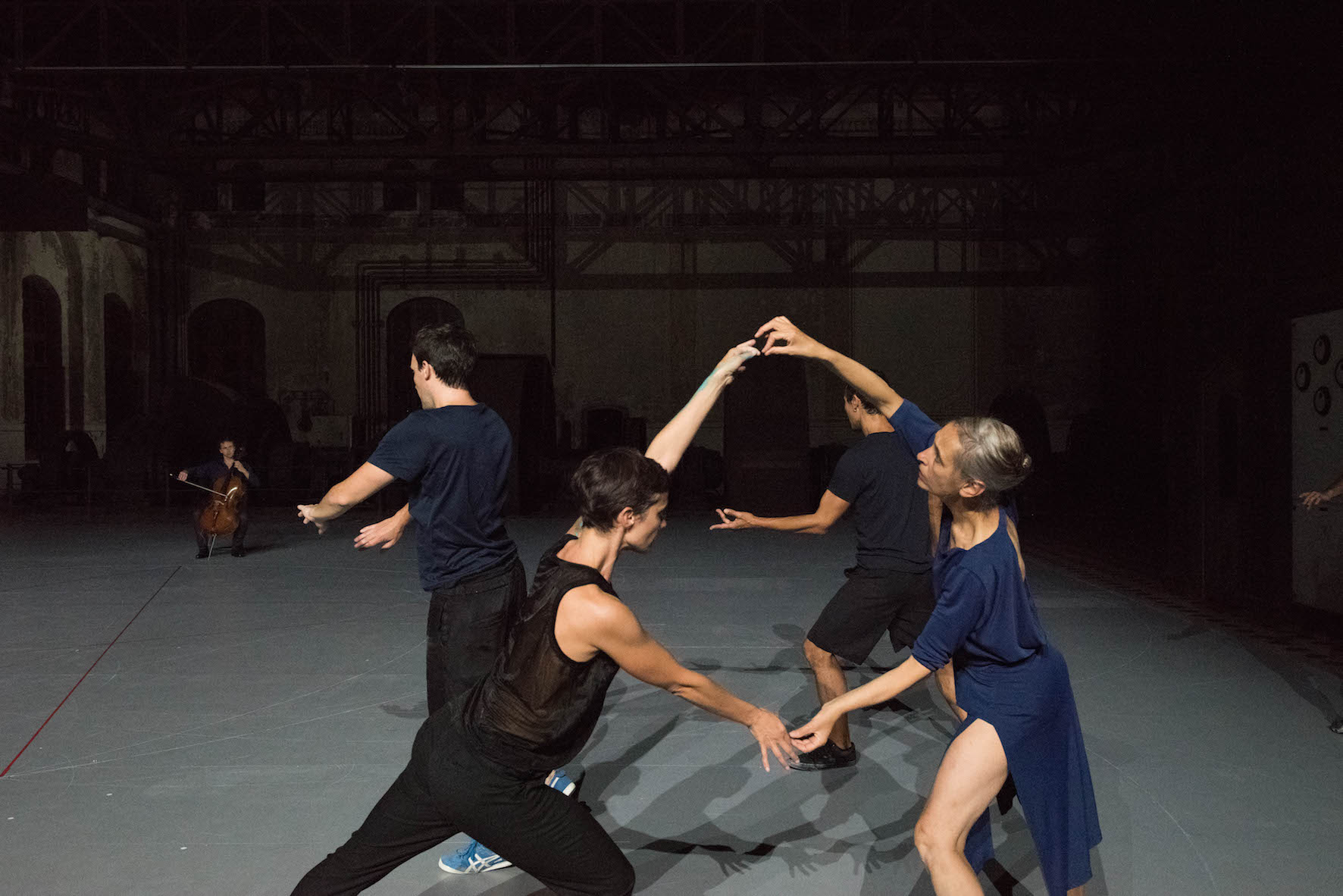 “(…) the work is not ‘about’, it ‘is’. Plainly and simply, it just ‘is’. ‘About’ would make it go around where all I do is try to make the invisible visible, without naming it.”

Anne Teresa de Keersmaeker in conversation with Kinga Jaczewska on theatricality, expression of nature, approach to colour and creative challenges that come along with having dance company.

Kinga Jaczewska: What mainly is the first element that comes to you to when creating or planning new work?

Anne Teresa de Keersmaeker: I would say it usually starts with music. The starting point is also strongly related to what I did previously, to what had the previous project led me to. Each new work is in a way a continuation or differentiation of the one before.

Also dancers can strongly influence the direction of the work. Sometimes the group of people that I have in mind can lead to the music I want to work with or otherwise, music can lead me to the dancers.

K.J: Together with the dancers you spend a lot of rehearsal time around the table studying musical scores. Having once observed creation process, I had the impression that it was music that had a central position in the work rather than dance which seemed to come as secondary.

ATDK: Once the decision is made with which music I work, I start developing parallel tracks. We analyze music. We study it in different aspects but alongside that and in silence, we develop a track of movement.

K.J: Are these two tracks equal? Or is there one which you would say has priority?

ATDK: They are definitely treated equally.

K.J: There is a strong relation between all of your works. Would you say that they deal with the same language that, in each new work, gets approached from a different angle?

ATDK: I think I am like a tree with roots in the ground and different directions reaching outwards. A symmetrical image with many branches that nourish themselves from very different sources but which grow out from one basic channel, a steady core.

ATDK: I think it comes from observation of nature and the desire to express that which connects movement on horizontal and vertical axe. It might sound very conceptual but it is actually what surrounds us.

K.J:  Reading the latest Rosas book which concludes the creation period of 2007-2017 I had to think of what is it that differentiates your earlier works from the chapter of the last 10 years. To me it has something to do with expression and presence of emotion as if in the latest pieces the role of it has been a bit less apparent.

ATDK: No, I would not say so. I think different periods have different priorities. In the beginning it was about dancing myself. The objective was to develop a relationship to myself and to my own body. Then the trajectory relating to music started. These were works with music of Steve Reich or with Thierry de Mey. What followed was use of silence and work such ‘Elena’s Aria’ which, compared with more theatrical ones like ‘Bartok’, was about coming back to the very movement itself.

K.J: Maybe it is the use and approach to theatricality that has shifted throughout the years…

ATDK: Well, music and movement have been always there, text has been there nearly from the beginning. There have been different branches to it but it all comes, basically and philosophically, from the same ideas which, throughout the years, get differently expressed.

K.J: In the latest works you seem to question the movement itself, what it is or could it be. In ‘My walking is my dancing’ or ‘My breathing is my dancing’ you work with silence and you present stillness as a movement material. These are not necessarily easy concepts for the audience. I would rather say challenging. Is ‘to challenge’ something you intend to do?

ATDK: No, I would not say so. I think that just relates to the basic idea of polarity which is a starting point. Oppositions are complimentary and they attract each other. The whole range between sounds, noise or music can only exist if you create silence. Every idea of movement only exists if there is stillness. Things are relative, it is proportion. You perceive movement or stillness in relationship to each other. Things cannot exist without their contrary.

K.J: An audience often desires to conclude what a performance is about. How do you deal with this ‘about’ question when it comes to your works?

ATDK: What do you mean with the ‘about’?

K.J: The work. Isn’t it a common tendency for viewers to want to leave theater knowing exactly what the piece was about, what the artists wanted to say?

ATDK: But the work is not ‘about’. It ‘is’. Plainly and simply, it ‘is’. ‘About’ would make it go around. It would make it circular where all I do is to try to make the invisible visible, without naming it.

K.J: During creation, are you often thinking about the audience and how it will experience the work? Or it is something you don’t pay much attention to?

ATDK: When creating, I am the audience. Standing outside and constructing, I am experiencing what is happening as a viewer. It is of course different when I am inside of the work.

K.J: And while outside, do you then check the work in terms of it being understandable/accessible for the audience?

ATDK: I don’t think I work in terms of understandable, more in terms of sharing the flow.

K.J: Works such ‘Vortex’, ‘Work/Travail/Arbeid’ and ‘Cosi Fan Tutte’ are one of the chains of works which followed one another and which are using similar movement language. This sort of recycling of material, is something you seem to regularly work with. Do you ever feel expected to offer completely new, virtuosic vocabulary that has not been previously seen in your works?

ATDK: In all modesty I think I have continuity in the work but there is also a lot of evolution between works such ‘Fase’ and ‘Vortex’… What is true though, is that you don’t change universe from one year to another. Change asks time.

K.J: Is such a complete change even possible?

ATDK: The language, the grammar and the vocabulary very often decide upon themselves in relation to two aspects. It is the people and the music you work with so the rate of change is indicated by that.

K.J: With Rosas you create new work more or less every year, sometimes even more. These projects are planned years ahead. How about the time and space for research and investigation which usually do not go along with too much planning ahead?

ATDK: I must say that it really is an issue. To have a company is a huge responsibility which asks a lot of work and organisation. I enjoy being in the studio but the work is not only what happens inside of it or on stage. There are a lot of other aspects which ask time and space.

K.J: And is it something that you miss?

ATDK: It is something we try to organise within the company. We do try to create the space in order to search, experiment and to find new ways.

K.J: When starting Rosas, the creations were of much smaller scale than they are now. I can imagine that working process was based more on a dialogue between you and the dancers than in more current, much bigger creations. Have the working methods changed a lot throughout the years?

ATDK: It still depends on the project. There are projects like ‘Mitten wir im Leben sind’ for five people within which dialogue is a big part of what became sort of ‘collective’ process. I still give the beginning and the ending but there is exchange within us. It is of course very different when it comes to work such as ‘The Six Brandenburg Concertos’.

ATDK: Yes. I don’t think that the working process has changed throughout the years. The size of works though, definitely did. It is much easier to have a joined decision-making when you make work with a small group than with a big group.

K.J: But in order to have this dialogue there must be a lot of trust from your side?

ATDK: It is not a question of trust. It is organisation. We create the context where people can assist. It asks a different approach to work, and a different planning.

K.J: I am also very curious about your approach to colour. In all your works there is a clear decision made upon it, even if it is one not to use it or to use it in the barely visible yet most crucial details. Is there a sort of symbolism, hidden line of meaning behind your use of it?

ATDK: Colour is for me really very important. It is like embodied energy. Especially in dance, in its visual aspect. It is like moving architecture or moving painting. Colour is the energetical embodiment that has a lot of meaning and power to itself.

K.J: Apparently it is not only colour that you chose to work with but a peculiar shade of it about which you are very, very specific …

K.J: Then I guess it is not only movement and music that are the guidelines within your works. The use of colour is also something to follow.

ATDK: Of course, very much so.

K.J: But that I feel is more of a secret line?

ATDK: Imagine ‘Fase’ being all in red or black clothes. It is very clear that the message would be very different.

K.J: And that message is probably decided upon very early in the process and the use of colour is not just a trial and error question of aesthetics…

ATDK: No, definitely not. Like with movement and music, it comes from within the working process.

K.J: Coming back to plans, what are the next projects?

ATDK: I am currently busy with the PARTS students. We are creating ‘Somnia’ – a site specific work to be premiered in Gaasbeek. Besides that, there is also ‘West Side Story’ which is to premiere at the end of this year in Broadway.

K.J: With ‘West Side Story’ you are in a way re-doing something that has previously been given form and shape by somebody else. Is this re-creation something that offers you creative freedom or is rather limiting it?

ATDK: It is hard to say. The work is made as a collaboration between Ivo Van Hove, Jan Versweyveld and myself so I guess it is different for everybody.

K.J: Are the previous versions of ‘West Side Story’ at all influential in the process? Are you working with or away from them?

ATDK: It is way too soon to say, there is still a lot of work that that needs to done…

K.J: It does sound very intriguing. Good luck with both works and thank you for your time.

about the author: Kinga Jaczewska

Kinga Jaczewska is a dancer, choreographer and visual artist based in Antwerp, BE.